Since 1982, Ray Burns and I have been working together in offering online information services with Ray taking care of the marketing and with me taking care of the technical side of things. Our first venture together was operating a commercial computer time-share service known as Medcom Information Systems, Inc. Medcom was an offshoot of Midcom Corporation (MIDCOM.com), a technical contracting & staffing firm started by myself and my wife, Barbara Cepinko, in 1979. MIDCOM was transferred to new ownership in 2013 after having been owned and operated by Barbara and myself for more than 33 years.

In 1990, Medcom began providing dial-up computer services to home users via a Bulletin Board System (BBS) called the Medcom BBS. In 1992, Medcom created a second BBS system named The Liberty BBS that provided information, forums and chat for a broad range of liberty related topics. Liberty grew to be one of the largest Bulletin Board Systems in the United States with thousands of subscribers and hundreds of local dial-up numbers throughout the country. The Liberty BBS was nationally acclaimed by many publications, including being described by Boardwatch Magazine as being one of the largest and best BBS systems in the nation. In 1993, we obtained the domain name Liberty.com and connected our computer systems to the internet for the first time to allow people throughout the world to access the Liberty BBS via telnet. TrainWeb LLC sold the Liberty.com domain name in 2013.

In 1993, the general public was just beginning to discover the existence of the internet and the web. Access to the online community was still mostly through dial-up BBS systems rather than through the internet. As knowledge of the web grew, interest in dial-up Bulletin Board Systems waned. We made a strategic decision to redirect our energies away from the BBS and to the web instead. Rather than compete with the large number of companies directing their energies to the general web audience, we focused on one particular area that interested us. That area was trains.

Believe it or not, I rode in a passenger train for the very first time in September of 1995. Prior to that time, it never crossed my mind that it was possible to travel significant distances by train in the United States. I'm sure I heard Amtrak mentioned in the news from time to time, but I never realized it was a national service nor thought it had any importance to my own life. Sometime in the early 1990s, some friends mentioned to me that they heard that it was possible to take long trips by train and that it was even possible to travel in your own private room on the train. That caught my interest. But, it wasn't until I heard an Amtrak radio commerical in 1995, that I decided to explore the possibility of taking a trip by train.

My children had a five day vacation from school coming up, so I decided to explore the possibility of taking an Amtrak trip during that vacation. It turned out that five days wasn't really enough time to go round-trip by train on the vacation we selected, from Los Angeles to Seattle. So, we flew to Seattle, spent a couple of days there, and then took the two day overnight trip on the Amtrak Coast Starlight from Seattle back to Los Angeles. From that moment, I fell in love with train travel and was hooked! Since that time, I have traveled all over the country by Amtrak and logged over 300,000 miles of rail travel. Ray Burns and Shivam Surve, the other members of the TrainWeb team, have been on some of these travels with me. Ray developed a good working relationship with VIA Rail in Canada and has traveled on almost every route in their network.

So, that is why we selected "trains" when we decided to concentrate our web company into one specialization. Since our website would feature "trains on the web", we came up with the domain name TrainWeb.com in December 1996. We held a contest open to the public to come up with the best design for a logo for TrainWeb. Among many submissions were a few excellent logo designs from Ken Barrett who was an Amtrak Ticket Agent at the time. The logo used by TrainWeb today is from one of the designs submitted by Ken Barrett. TrainWeb continued to share office space with its parent company, Midcom Corporation, in Anaheim, California, until 1997. On September 1, 1997, we moved TrainWeb into the offices above the Amtrak Ticket Office in the Fullerton Santa Fe Depot in Fullerton, California.

In 2000, Midcom hired a new programmer who was waiting to be placed on assignment with one of Midcom's clients. Since he had an interest in trains, Midcom had him temporarily do some work for TrainWeb. Ray and I were immediately impressed with his programming and web design abilities and brought him full-time onto our staff. That is how Shivam Surve joined the TrainWeb team and became our key designer for new features and new websites at that time.

Over the years parents would often ask us where to find railroad themed party supplies. They turned to us after they were dissatisfied with the selection and availability of these items that were carried by regular party supply and department stores. The owners of TrainWeb decided to explore if a significant market might exist for railroad themed party supplies. Thus, we created TrainParty.com and our business started to grow exponentially from there! We had to move out of our small office above the Fullerton Amtrak Ticket Office where we had been located for almost ten years. We moved just down the street to a storefront / warehouse, but still in Fullerton. In less than a year, we even outgrew that location and realized that we really needed to be in a much larger warehouse facility that was located centrally in the nation for faster and cheaper shipping to both coasts. Thus, we moved TrainWeb to La Plata, Missouri. For the rest of the TrainParty.com story, please click here.

While Ray Burns and Shivam Surve moved to La Plata, Missouri, and set up the new TrainWeb.com / TrainParty.com building there, my wife and I remained in California where I continued work on TrainWeb.com from an office in my home. In December of 2011, my wife and I moved to Vancouver, Washington, where our new home office overlooks the route of the Portland segment of the Amtrak Empire Builder on a very busy BNSF line. We do have webcams in our home in Vancouver that capture live streaming video of the BNSF and Amtrak trains on these tracks. We are currently working on technology that will allow TrainWeb to share this live streaming video with our web visitors to RailCams.com. Until we have live streaming video available you can view short video clips of trains, including the Amtrak Empire Builder, that are posted almost daily to: RailCams.org/WA-FL .

In 2014 TrainWeb President and co-founder, Raymond Burns, passed away. Ray is sorely missed but our efforts continue on at TrainWeb and APRHF. As explained elsewhere, responsibility for the management and support of the railroad related content of TrainWeb was transferred to volunteers of the 501(c)(3) non-profit organization, the American Passenger Rail Heritage Foundation (APRHF.COM) in 2013. For more information about the APRHF and the transfer of this responsibility, please click here.

As of January 1, 2016, all ownership and all management of all of the TrainWeb web sites has been transferred to NordiLusta LLC, a Washington State based company owned by Steve Grande and his wife, Barbara Cepinko. All the websites will continue to operate under the tradename "TrainWeb", including TrainWeb.com, TrainWeb.org, TrainWeb.US, etc., even though they are no longer owned by the Missouri business entity, TrainWeb LLC.

TrainParty continued to operate from the building at 100 East Benton Street, La Plata, Missouri, for a few years, but that building is now owned by Silver Rails Properties LLC and will eventually become a winery operated by Silver Rails Vineyards LLC. In 2021, TrainParty.com, was purchased by new owners not affiliated with any of the original founders of TrainWeb. They have moved TrainParty out of that building. The 40 acres of land that stretch all the way from the Depot Inn & Suites hotel to the railroad tracks and the La Plata Amtrak Station, are in the process of being turned into the Silver Rails Vineyards which is managed by Tom Anderson and owned by Steve Grande and Barbara Cepinko. For a number of years, the Depot Inn & Suites hotel was owned by Steve Grande and Barbara Cepinko. The hotel was sold in 1996 to new owners who continue to operate it as a railroad theme hotel. 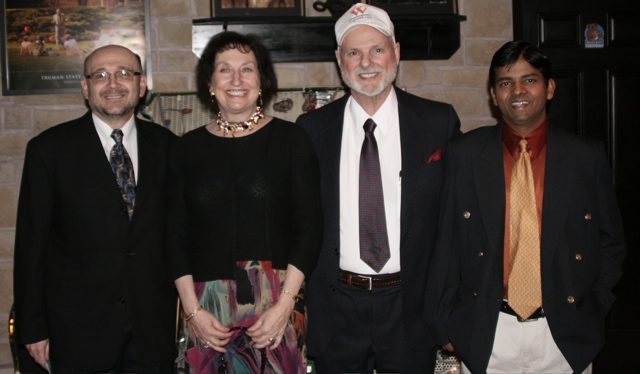