This is a report that confirms my prior perceptions of why I gave up riding in Business Class on the Amtrak Pacific Surfliner a few years ago. My own view of the experience might be very unique. A lot of passengers must like the experience since every time I have observed the car, it has been quite full.

I made it almost a ritual to take a round trip ride from Fullerton to San Diego early most Saturday mornings in Custom Class on the Amtrak San Diegan. Leaving my house around 6 AM I would return home around noon. Since everyone in my home liked to sleep late on Saturdays, I was able to make that round trip almost before anyone else was awake in my home yet. I gave up doing those frequent round trips quite a few years ago, but I still sometimes get crazy ideas for train trips once in a rare while.

The offer further stated that the ten trips had to be taken between October 1 through December 14, 2010. The offer provides 10,000 bonus points when you Take Ten trips, Double points on all Amtrak travel, plus the points you already earn for Amtrak travel.

I figured this would be easy for me to earn! Ten trips is only 5 round trips. Though I don't travel on Amtrak as often as I used to, most likely I'd at least be taking 5 short round trips on the Amtrak Pacific Surfliner before December 14, 2010. So, I went on the Amtrak Guest Rewards website and registered for the promotion.

Later that day I got an email from Chris Guenzler (TrainWeb.org/chris) commenting on this being a bad offer from Amtrak for those of us that live in Southern California. At first I was confused why this was a bad offer. But unlike me, Chris had read the fine print on the offer (definitely in mice type font size) that said that each trip must cost at least $40 for each one-way trip. To get credit for both segments of a round-trip, both going must cost $40 and returning must cost $40. Chris also pointed out that this is almost impossible to do on ANY trips on the Amtrak Pacific Surfliner, no matter how far you are traveling!

Examining the offer that Amtrak expects one to take 10 trips in just 10 weeks, this definitely seems aimed at trying to get either commuters, or those that frequently travel between major city pairs, to take the train instead of driving or flying. It can't believe it is aimed at long distance Amtrak riders as who would be taking 5 long distance Amtrak round-trips in just 10 weeks? I don't think Amtrak came up with this offer to encourage crazy rail travel fans like myself and Chris to take lots of long distance Amtrak trips, but I can't imagine anyone else that has a chance of benefiting from this offer -- with one MAJOR exception: AMTRAK TRAVELERS ON THE NORTHEAST CORRIDOR!

Though this promotion was mailed to Amtrak Guest Rewards members across the nation, I think it was really only aimed at potential riders of the Amtrak Northeast Corridor. Riding Amtrak just from Boston to New York City ranges from $95 to $126 just one way. Riding from New York City to Washington, DC ranges from $74 to $180 just one way. Even shorter trips like from Philadelphia to New York City range from $47 to $117. These are trips that many people take round-trip every day, or at least several times each month. This Amtrak Guest Rewards campaign seems aimed at trying to get these people to make these trips more often by train rather than by driving or flying.

But this is nothing new. I have Amtrak Guest Rewards Select Plus status. What are the rewards for this achievement? Well, there are some useful rewards for everyone like having a special phone number for Amtrak Guest Rewards reservations plus earning extra points on every trip. But some of the major rewards include several coupons that can be used for a "Free Amtrak One-Class Upgrade". Outside the Northeast Corridor, these have a value of maybe $15 each. That is about what it costs to upgrade from Coach Class to Business Class on the Amtrak Pacific Surfliner. These coupons can't be used on the Amtrak long distance trains, so I have to assume they are of no use to Amtrak Guest Reward Select and Select Plus members that don't live near one of the few Amtrak corridor services. In the Northeast Corridor, a One-Class Upgrade can be worth $50 or even more. I also get unlimited access to the Metropolitan and Acela Lounges. There are a number of those on the Northeast Corridor. There are NONE on the route of the Amtrak Pacific Surfliner and they are relatively rare across the rest of the nation. I'm only aware of one in Chicago, one in Portland, Oregon, and one in New Orleans that are outside the Northeast Corridor. So, this isn't of much use to those outside the Northeast Corridor except for long distance Amtrak riders when they are changing trains in one of those cities, which they'd have access to anyway if traveling in a Sleeping Car. One of the rewards is also a couple of Free Companion Coupons which do appear to be good in Coach Class on any Amtrak train, corridor or long distance.

I guess it makes sense that most of the Amtrak Guest Rewards special offers, promotions and rewards are geared to attract more riders to the Amtrak Northeast Corridor since there are so many frequent riders on that corridor. I just wish they wouldn't tempt me with offers and rewards that I can't use, and that very few can use, that don't live in the Northeast Corridor area. I can't help but miss the days when Amtrak had three divisions and Amtrak West directed a lot of promotions and rewards specifically at those of us living and riding Amtrak in the west. One of the best rewards programs Amtrak ever had for those of us living in the west was their mileage rewards partnership with Alaska Airlines. That was a program with attractive and useful rewards for those of us that live anywhere on the west coast that provided promotions with achievable goals.

Anyway, back to my Amtrak Pacific Surfliner Business Class experience ...

I figured out there was one way I could reach the goal of the Amtrak Guest Rewards Ten Trips offer. I could go all the way from Anaheim to Santa Barbara in Business Class round trip 5 times. Each trip would normally be $29 in each direction, but since the cost to upgade to Business Class is $14, the total for each one way trip would be $43, satisfying the requirement be at least $40 in each direction. Five such round trips should qualify for the Amtrak Guest Rewards Ten Trip bonuses.

In the end, that would be 10,000 points for $415, which is not a real big bargain. That comes to a bit more than 4 cents per point. But it also gives me at least another 200 points per round trip as the regular mileage earned, plus doubles that milage to 400 points per round trip. I would assume I also earn my regular Amtrak Guest Rewards Select Plus bonus points on top of that and the points for purchasing on my Amtrak Chase Mastercard. So, maybe I'll be getting another 600 points for each round trip. That would give me a total of about 13,000 points or so for the Amtrak Guest Rewards Ten Trip offer.

I boarded Business Class on the Amtrak Pacific Surfliner. I saw immediately that it was the nightmare that I had envisioned, and why I normally avoid Business Class!

First, there was no where that I could sit by myself next to a window. Every seat by a window was already occupied. Thus, the Business Class car was pretty full. We might have had a Car Attendant. I don't remember there being one. Everyone would get up and get their own coffee, snack, and newspaper (if there was one). I sat next to a person that had a blank seat check. I was just guessing that meant they would be getting off the train in Los Angeles and I'd be able to have a window seat once we departed Los Angeles. I was right on that count. A few people got off in Los Angeles which allowed those already in Business Class to shuffle around to better seats. Some people that had to separate because there were no seats together in Business Class were able to rejoin each other in pairs of seats as some people got off in Los Angeles. Others traveling along who didn't have a window seat were able to move to a window seat. But as soon as the new Business Class passengers boarded in Los Angeles, the Business Class car again was pretty full.

What are the advantages of Amtrak Pacific Surfliner Business Class? Well, you have a bit more leg room than most of Coach Class, but not a lot. You get free coffee and I think a free breakfast pastry. That doesn't mean much to me as I've already had my coffee by the time I get to the train and I don't eat breakfast pastries. They used to provide a free newspaper. I think they still do, but I didn't look for it as I get home delivery off all the newspapers that I want to read in the morning. They also provide free WiFi. I wasn't impressed as I had a very difficult time trying to get anything done on it as it was so slow. I have my own WWAN car which is much faster than the free WiFi so I stayed with using that.

Here is the real killer: due to lack of equipment, almost every Amtrak Pacific Surfliner contains one Amtrak Superliner Long Distance Coach Car to make up for the car shortage. This Superliner Coach Car is far more comfortable and provides far more leg room than any seat in the Pacific Surfliner Business Class Car! The Superliner Car has wide heavily padded seats. They recline far more than the Business Class seats, and not only have foot rests but also leg rests that fold up out from under the seat!

The Superliner Car has curtains at all the windows that provide a cozier and higher class feel to the car. Often when I enter the car, the curtains are drawn closed at every seat except where passengers are sitting. Even some of those are drawn closed where passengers are taking a nap. Thus the car will often be relatively dark inside which stands in stark contrast to the rest of the Pacific Surfliner train that has no curtains in any window, not even in Business Class. Thus the sun comes pouring in. When sitting in Business Class, I've often had to move to the other side of the aisle when the glare of the sun ---- computer screen. 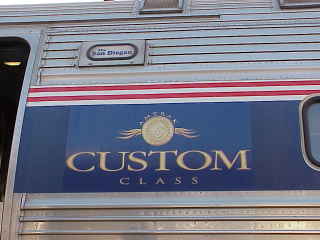 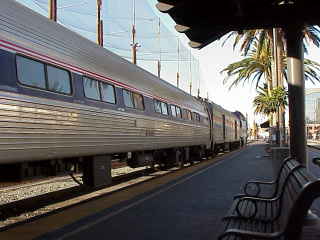 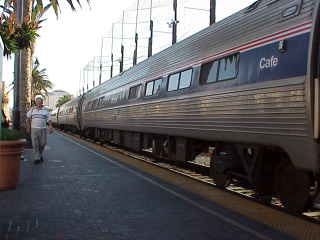 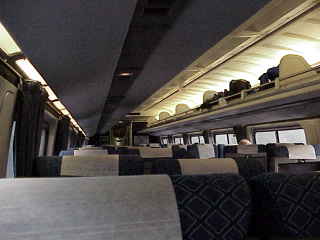 CLICK HERE for a report and photos from 1998 about the Concept 2000 Custom Class when it was first introduced on the Amtrak San Diegan route.

Are you interested in rail travel along some or all of this journey yourself? There are very few travel agents that have the necessary knowledge and experience of rail travel to answer your questions and to book a journey that you will remember for a lifetime. TrainWeb has sought out those travel agencies and rail tourism companies that not only have the knowledge to book your travel, but have gained the required experience through extensive rail travel themselves! Click here for a list of these rail travel providers!